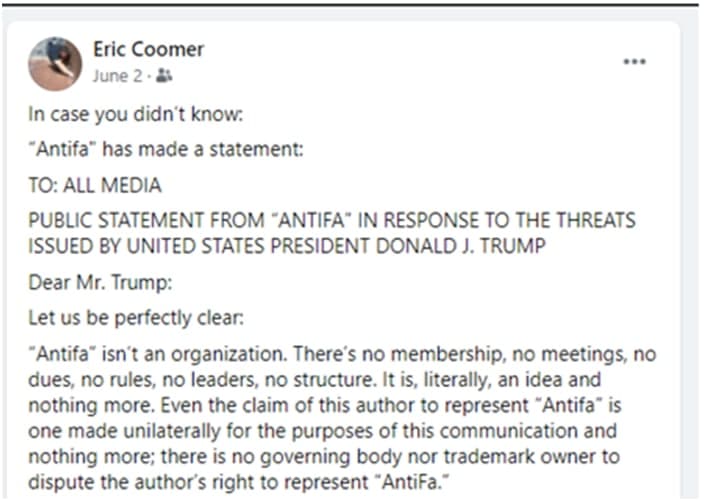 Eric Coomer, Dominion Voting Systems Officer of Strategy and Security may have invalidated the election just by Dominions involvement in it¦with Antifa, and foreign officials behind Antifa that he took direction from throughout 2020.

Oltman explained that âEricâ was telling the Antifa members they needed to âkeep up the pressure.â

When Oltman asked, âWhoâs Eric?â someone answered, âEric, heâs the Dominion guy.â Oltman said that as the conversation continued, someone asked, âWhat are we gonna do if F*cking Trump wins?â Oltman paraphrased how Eric (the Dominion guy) responded, âDonât worry about the election, Trumpâs not gonna win. I made f*cking sure of that!â– The Gateway Pundit

I say almost because although it places him communicating with Antifa, there are blanks that need to be filled in. First and foremost is how important was the mail-in ballots scheme to Coomerâs ability to deliver the election and make his railing above possible?

In an August 18, 2020 article, US Antifa leadership was exposed in Germany. The above image shows Ben Utzer, a member of the German Pirate Party leadership, and US Antifa already knew mail-in votes were crucial to this blatant campaign against Democracy.

According to an August 17, 2020 post, mail-in ballots for the general election seem to be the centerpiece for the anti-Trump Resistance to rally around.

The German Pirate Party leadership left a breadcrumb trail from Antifaâs oldest website dating back to the 1990s back to themselves. â CD Media