On Thursday, President Trump sounded the alarm about Dominion Voting Systems, claiming as many as 2.7 million Trump votes were deleted and switched to Biden in Pennsylvania and other states using the software. 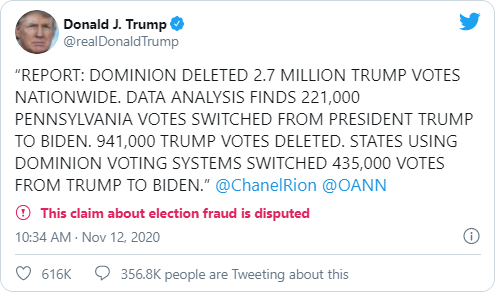 Twitter predictably flagged the claim, and the media rushed to dispute it. Even Snopes fact-checked the claim as false.

In a December 6, 2019, letter, Warren, Klobuchar, Sen. Ron Wyden (D-Ore.), and Rep. Mark Pocan (D-Wisc.), issued a formal complaint about these three companies, which they said “threaten the integrity of our elections.”

Here is a key paragraph from the letter, which is still available via Senator Warren’s Senate website.

In 2018 alone “voters in South Carolina [were] reporting machines that switched their votes after they’d inputted them, scanners [were] rejecting paper ballots in Missouri, and busted machines [were] causing long lines in Indiana.”14 In addition, researchers recently uncovered previously undisclosed vulnerabilities in “nearly three dozen backend election systems in 10 states.”15 And, just this year, after the Democratic candidate’s electronic tally showed he received an improbable 164 votes out of 55,000 cast in a Pennsylvania state judicial election in 2019, the county’s Republican Chairwoman said,”[n]othing went right on Election Day. Everything went wrong. That’s a problem.”16 These problems threaten the integrity of our elections and demonstrate the importance of election systems that are strong, durable, and not vulnerable to attack.