NBC’s Trump townhall was good, if you subtract Savannah Guthrie…… 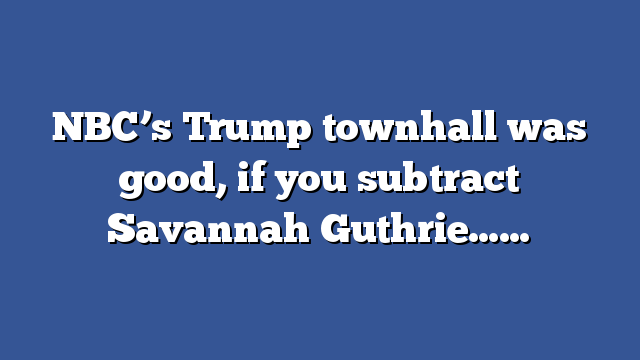 After watching the voter Q&A portion of NBC’s town hall event Thursday with President Trump, I’m wondering if there’s a way for Trump to go ahead and skip the third debate as well. But only if he can replace it with another town hall that has no Savannah Guthrie.

Actually, it would be best if there were no self-important TV journalist to pipe up at all to give his or her two cents on something nobody outside of Washington honestly cares about.

The first half of the town hall was completely worthless as it was filled with Guthrie asking when had Trump most recently tested negative for COVID-19 before he tested positive two weeks ago; and why did you owe a relatively low amount of federal taxes four years ago; and will you disavow the obscure online group called “QAnon”?….These are topics that tickle journalists in Washington and put everyone else to sleep.

What the voters who finally got to speak wanted to know was why hadn’t Trump done more to stop the spread of the coronavirus, how would he further repair the economy in a second term, and when is the next round of stimulus coming for people who watched their dreams slip away because they were told by the government to shut down?

Those are important questions, and Trump, the president, actually has things to say about them. If only voters were allowed to ask, then we might be able to hear it.