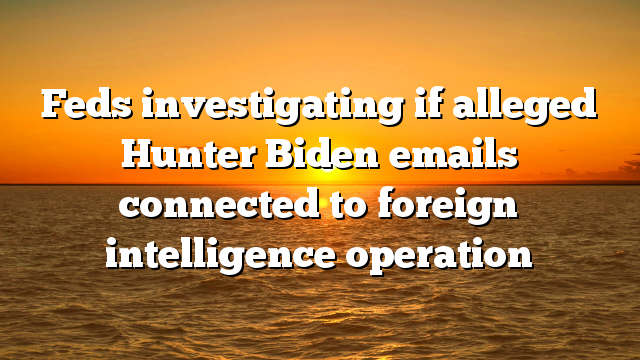 Two people familiar with the matter told the network about the federal investigation.

The FBI took the laptop and a hard drive through a grand jury subpoena that was later published by the New York Post, a conservative newspaper.

The FBI declined to comment to The Hill on the reported probe, citing its standard practice of not confirming or denying an investigation.

The New York Post published several stories about the alleged emails, including one that hinted at an alleged meeting between Joe Biden and a representative of a Ukrainian company that paid his son at one point. The Biden campaign has maintained the meeting did not occur.

The tabloid said it retrieved the documents used for the story from President Trump’s personal lawyer Rudy Giuliani. It reported that the information was discovered on a laptop left at a repair shop in April 2019 and never picked up.

Hunter Biden’s attorney George Mesires said in a statement to NBC News that “We have no idea where this came from, and certainly cannot credit anything that Rudy Giuliani provided to the New York Post, but what I do know for certain is that this purported meeting never happened.”

Biden campaign spokesperson Andrew Bates told NBC News that the New York paper “never asked the Biden campaign about the critical elements of this story.” He said the campaign has looked at Joe Biden’s official schedules from the time “and no meeting, as alleged by the New York Post, ever took place.”

“They certainly never raised that Rudy Giuliani — whose discredited conspiracy theories and alliance with figures connected to Russian intelligence have been widely reported — claimed to have such materials,” he added.

The New York Post said the repair shop owner, identified by the Daily Beast as John Paul Mac Isaac, informed the FBI and a Giuliani associate the laptop belonged to Hunter Biden because of a sticker on it for the Beau Biden Foundation, a charity for his deceased brother.

“Before turning over the gear, the shop owner says, he made a copy of the hard drive and later gave it to former Mayor Rudy Giuliani’s lawyer, Robert Costello,” the Post said. “Steve Bannon, former adviser to President Trump, told The Post about the existence of the hard drive in late September and Giuliani provided The Post with a copy of it on Sunday.”

News organizations have not been able to authenticate the emails published by the Post as of Thursday night.

Giuliani has searched for damaging information aboutBiden and his son, including through a visit to Ukraine last year, in which he met with a man now identified as a Russian intelligence officer. The president’s lawyer sought to retrieve information about Hunter Biden’s position on the board of a Ukrainian gas company Burisma.

The New York Times reported in January that Burisma was hacked in an effort by Russia, and the newspaper reported Thursday that U.S. intelligence predicted that the emails retrieved in the hack would be leaked in October.

The Washington Post reported Thursday evening that U.S. intelligence officials warned Trump that Giuliani was the target of an influence campaign conducted by Russian intelligence.