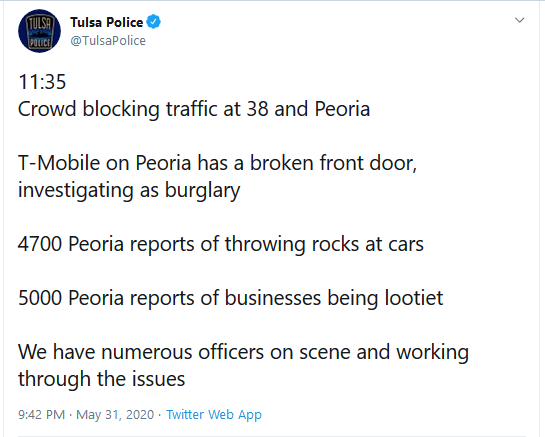 Police have had to use tear gas in an attempt to get protesters out of the street in Midtown.

Protesters marched into the late hours of the night and to the midtown Tulsa neighborhood, Brookside.

Police have lined up with shields and batons across from the Quiktrip at 36th and Peoria as they stood across from a large group of people in the road — eventually breaking up that crowd with tear gas.

Around 10 p.m., police say they shot pepper balls into the crowd in an attempt to get to get them to leave.

Police were shouting commands and warnings to the crowd before firing, mostly breaking up the peaceful display they say was unlawful because several people were in the street.

You get the idea. That article was updated June 2nd and still does not contain the word “curfew”.

Tonight, the Mayor of Tulsa invoked a last minute curfew to displace MAGAs who’ve arrived early to wait in line to attend Trump’s rally. Note in the video linked below, one police officer wearing standard issue blue uniform (no riot gear, rubber bullets or tear gas) fearlessly addresses MAGAs re who have been peacefully present for days.