A Southern Baptist woman was fired from her job and received online harassment after posting a video calling on Christians to reject the Social Justice Gospel. Reagan Escudé is a lifelong Southern Baptist. She is from Shreveport and has lived four years in Natchitoches, Louisiana. She graduated college in 2019 and worked at a local business for almost a year (June 10 would’ve been her anniversary.) But the mob came to cancel her.

“If anyone was wondering about the power of mob mentality & cancel culture, I was just fired from my job for giving a Biblical response to social issues. Any advice from other voices who feel silenced?  #censorshipisfascism #groupthinkisadisease #iwontgosilent.” 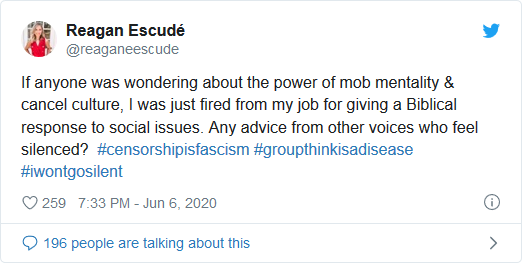